There has been some debate about the name of the field that I have been working on in this blog and elsewhere. Three common terms are “culinary diplomacy,” “gastrodiplomacy,” and “food diplomacy.” Others have championed “gastronomic diplomacy,” “diplomatic gastronomy,” and “diplogastronomy” (okay, that one hasn’t been taken yet).

I’ve defined culinary diplomacy as “the use of food and cuisine as instruments to create cross-cultural understanding in the hopes of improving interactions and cooperation.” My colleague Paul Rockower defines it as “the use of cuisine as a medium to enhance formal diplomacy in official diplomatic functions such as visits by heads-of-state, ambassadors and other dignitaries.” He distinguishes it from gastrodiplomacy, in regards to which he says “Gastrodiplomacy seeks to communicate culture through food to the broader foreign public. Moreover, gastrodiplomacy seeks to engage people-to-people connections through the act of breaking bread.” He doubles down, too: “It is important to create such dichotomies as the discourse and practice of culinary diplomacy/gastrodiplomacy is expanding.”

After I appeared on The Splendid Table and made some remarks about the terminology, there was a great Twitter exchange between myself, scholars Rachel Laudan and Rachel Herrmann, and Paul Rockower. Highlights were: 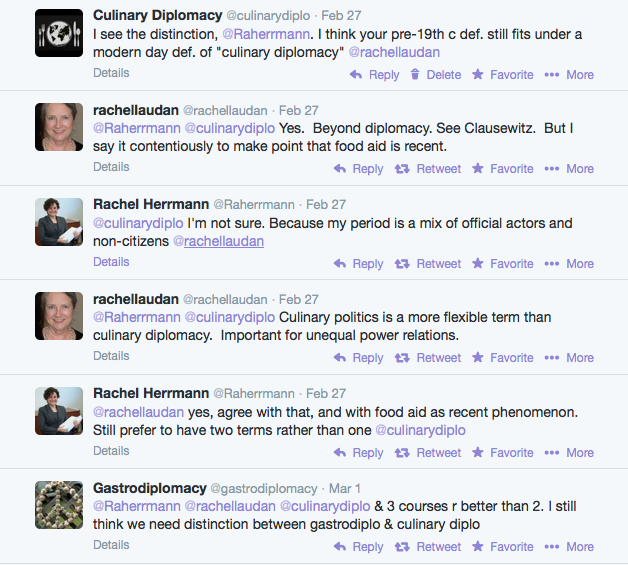 See here for the rest of the exchange.

Cypriot scholar Costas Constantinou, who wrote the fascinating book On the Way to Diplomacy in 1996, included a chapter introducing another term, entitled “Gastronomic Diplomacy: Commensality, Communion, Communication.” He wrote this fifteen years before the rest of us caught up, and we’re all still figuring out the import of what he said. His early contribution included the following:

Gastronomy is not irrelevant or peripheral to political representation but, rather, … commensality and dietary practices are ways of inscribing community and feature forms of communication between parties in communion.

Linda Morgan, another scholar who published a paper called “Diplomatic Gastronomy: Style and Power at the Table,” had this to say:

While diplomatic gastronomy has many aspects to consider, including the actual food served, this article focuses on diplomatic dining in which individuals representing sovereign political interests share a meal under the auspices of certain protocol, cognizant of all communication, especially that emitted by the semiotics of the event.

So where does that leave us? It all gets a bit, well, semantic. Do these discussions lead us anywhere? The field remains young, and as more voices enter, there will be both more clarity and more opinions about what terminology we should be using. I look forward to continuing the debate, though in the meantime I’m happy to use whatever word makes sense to whomever I’m speaking with. It’s not the term but the idea that’s important, and as I work to encourage others to explore this field, I’ll work to put more energy into advocating the ideas of the field instead of its name.

But what about in other languages? Does it still smell as sweet? Well, we’ve gotten the chance to find out, as a recent article in NPR about a course I’ve been developing with Dr. Johanna Mendelson Forman at American University echoed around the world.

Romanian newspaper The Epoch Times wrote about it, using the terms diplomaţiei culinare and gastrodiplomaţia.

Finally, a few pieces in the Chinese press came out as well, with 美食外交 being the translation. If my two years of Chinese and Google Translate crutch get me anywhere, that translates as “food diplomacy,” pronounced “měishí wàijiāo.”

Whether in English, Chinese, Romanian, or French, and whatever terminology you use, we’re on to something here. And while a single term might never sum up what that thing is, I’ll paraphrase Supreme Court Justice Potter Stewart and say “I know it when I see it.”